What to Do With a Loose Horse

Pay attention! A horse that is loose in the arena is often as engaged in the activity as the horse that is working directly with the client. When I was in Uruguay teaching equine guided coaching, I wanted to convey this with a learn-by-doing approach.

My Proyecto dos Equis team set up a large circle with four quadrants, each big enough for a person and horse to stand in. The activity is called Expanding Perspectives. Each quadrant represents a perspective from which a client could consider a problem.

That day Veronica volunteered to be coached. Everyone else in the course, about thirty people, gathered around the outside of the circle to observe. We had several assistants throughout the arena, and one loose horse, Sarandi. Veronica stood in the first quadrant holding a big white gelding, Amarin, on halter and lead rope. All attention was on Veronica and Amarin. No one really noticed Sarandi quietly nosing about, then settling into the background.

In the perspectives activity we start by focusing on the client’s current perspective. Ii this case, Veronica wanted to start a therapeutic riding business in a town about an hour away. Her current perspective: not possible until she retired from her office job in twenty years. I asked her to look at all the things about that that seemed true, and notice how her body felt. When doing this work, I watch the horse, also, for cues and clues that help me ask questions that will deepen my client’s inquiry into her current perspective. When the client feels complete in looking at that perspective, she moves to the next quadrant. 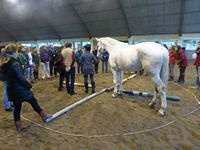 In this case, while standing in the second quadrant with Veronica, Amarin touched his nose to a pregnant spectator's belly. I asked Veronica what she would see if she looked at starting this new business as if it were a child waiting to be born. From that perspective, she saw that it would be something to nurture gently, and that there is a gestation period that has its own time. One must prepare and trust the process. We moved to the third quadrant, and though I now forget the perspective Veronica explored, we went through the process of really considering the problem from only that perspective, watching Amarin for his insights.  Lastly, Veronica moved to the fourth quadrant which was a perspective she suggested: that she had all the support she needed to start now. Amarin stood close to her. She shared with us that she already had a farm secured. She had people waiting for a program to begin. She had friends and colleagues to help her. She began to see that she did have support.

It was then that Sarandi lifted his head and from the other side of the arena strode purposefully through the perspectives circle and the observers surrounding it to plant himself in front of one of the spectators lining the edge whom I didn't recognize. He was a visitor who hadn’t been with us during the four-day training. Many in the group noticed what was happening and a murmur rose from the crowd.  "Tell me what happened, Veronica," I said. " That is my husband,” she replied with tears in her eyes. A hush went over the group. "He is my biggest supporter." She stood with Amarin at her side Looking across into the eyes of her beautiful husband. “Thank you,” she murmured. “Thank you.”

I say thank you to Amarin and Sarandi, especially, who taught us so much about how tuned in the horses are, even if we think they aren't part of the activity. I didn't know what Sarandi would do, if he would participate actively or not. But I knew he would be tuned in whatever way he showed up. I say thank you to him for teaching so many to trust the miracles that can happen when we just let the horses do their work,